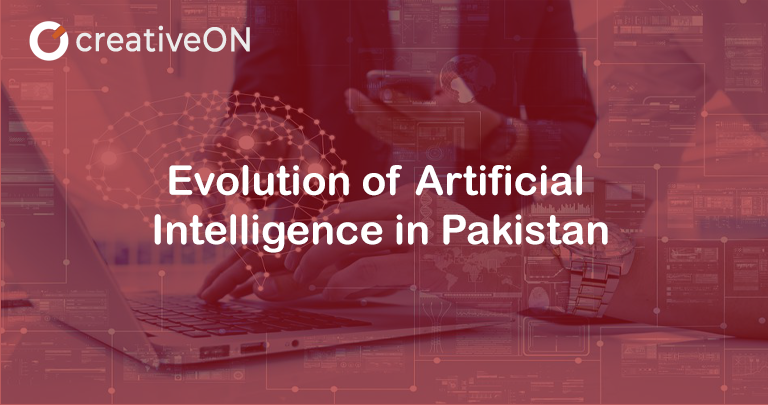 Evolution of Artificial Intelligence In Pakistan

In recent years, at creativeON, more and more people, especially graduate students, bought our services to use python for their final year projects in Artificial Intelligence projects. It is the one major shift we noticed after 2020, the others being the demand for large data storage and cloud computing. I was compelled to write this brief post about AI and how it is evolving in Pakistan for our blog readers. To know more about AI, you should consider watching this youtube series on youtube,

Let us start with the basic question: What is Artificial Intelligence (AI)? The term AI was first used in 1956 by John McCarthy. According to Merriam-Webster, the primary definition of it is “The ability of a machine to imitate intelligent human behavior.”
It includes visual perceptions, speech recognition, language translation, and more. The computer analyses the statistical data provided to it and generates its response. It is programmed in such a way as to take into consideration any minor change in either the data or the algorithm and formulate the results accordingly.
It may sound like an unachievable thing, one of the many human desires which seem far-fetched, but to your very surprise, it has become a reality. China has established its Next Generation Artificial Intelligence Development Plan, the United States of America has created AI leadership, and all the developed countries are jumping on the bandwagon. You use much of the AI technology without even realizing it. It is estimated that the global AI software industry will reach approximately 126 billion dollars by 2025. Hence countries are formulating their policies considering the global trends in the AI software industry. If we look at it, from the fingerprint sensor on your phone to the space rockets being sent to space, all are examples of Artificial Intelligence. Weather predictions, navigation systems, surgical aids, missile systems, or a small auto-correct feature on your mobile phones are all AI you use daily.

If you look at the history and trends in Pakistan, the country is always a late bloomer when it comes to adapting to the advances happening around the world. Unfortunately, we can say the same about AI as well. Most of the people of Pakistan still think that AI specifically means talking robots who can perform, learn, plan and carry out chores like human beings. The credit for having this thinking goes to the Hollywood movies like Terminator and Westworld. When a super robot who looks like a human, fights and protects the world, in the end, it creates the idea that AI is just limited to these superhuman robots. But time has started to change, and for over a decade, people have become interested in this field. Universities have been offering courses to encourage the trend among the youth to keep the instigated spark alive in them. We can safely say that the future will be bright and promising. The access to opportunities like the Internet, availability of computers at cheap rates, accessibility to tutorial videos, and a sense of competition have got people going. People have started to become more and more dependent on these AI technologies. The growth of eCommerce business is also due to AI technology.

How mind baffling, it is that you can call a cab service by just clicking a few times on your smartphone. It can also be used more effectively, like in solving domestic problems in the agriculture system, education system, health care department, etc. An article published in The Express Tribune on July 18th, 2022, revealed that a group of professors at Information Technology University Lahore have been working on solving different problems and uploading their research at top-tier AI conferences. Many other top-notch universities, LUMS, NUST, PUCIT, and FAST, have also opened research labs providing opportunities and resources to solve the problems impacting our country using AI technology. In 2018, an initiative was taken by the Government of Pakistan when it opened the National Centre of Artificial Intelligence (NCAI). It comprises nine research labs and six universities in total. We can say that from using smartphones to developing advanced ballistic missiles, Pakistan has come a long way.

Most recently, Comsats University, Islamabad, has launched an AI project worth approximately 1 billion PKR to better the higher education system for students. It has extended this project and included six major IT universities in Pakistan, including Comsats University Islamabad, UET Peshawar, NUST, NED University of Engineering and Technology Karachi, and Punjab University, as reported in local media reports. It is planned that nine research labs will be opened in four of the major cities of Pakistan, i.e., Lahore, Islamabad, Peshawar, and Karachi, for the development of AI technology and to compete with the standards of developed countries across the globe. Subjects like Cyber Security, Robotics, e-gaming, speed coding, etc. Most probably, the project will begin next year. It is being suggested that if projects like these keep on emerging and the right decisions are made, the export of Pakistani Software may reach up to 30 billion dollars by the year 2023. If we acquire this goal, we must take serious measures to step up the game.

It will most likely happen when people say that the future is all digital and the world will shift to AI. Man, in his all consciousness, is trying to find ways to set foot on Mars and has already landed on the Moon; there is no doubt that the dynamics of the Earth will completely transpose into this world of AI technology. The Government of Pakistan should consider taking steps to cope with the rest of the world. We should revise our curriculum and provide our youth with up-to-date courses. Arfa Karim Randhawa was a shining example that showed that if opportunities are provided, we can succeed. The potential convinces even the world of Pakistani youth, so why not provide them with resources and let the country flourish? Pakistan’s military is also improving its defense system using AI technology by developing smart bombs and supersonic jets like F-17 thunder, avionics, and whatnot. So, we should make good investments and specify a certain amount from the national budget to open research labs and make a smooth shift towards AI.